Houston is about the hustle. And as such, we haven’t been very well known for keeping historic buildings. In San Antonio, you’ll find old buildings, and in Houston, you’ll find shiny new ones. In Houston, we build something new. We strive on a boosting economy and don’t have much time for nostalgia. But now, some of that has changed. Houston has been looking at and celebrating its past, from revival of historic communities (like the Heights) to the renovation of older buildings—see the restoration of The Heights Theater, The Astrodome, and now, the Sears building. The four-story structure sits at the corner of Main and Wheeler, and has been empty since the Sears store shuttered in January, after 79 years of business. The Sears building dates back to 1939, constructed in an exciting era and rich with history. This building’s layers reflect the city’s continued strive for business, through unrest and hardship–on the outside, Houstonians would look up at a building shrouded by drab, corrugated metal of the 1960s, a modern and streamlined look at the time, reflective of the Brutalist style that was common for public buildings during that decade. Buildings underwent this change often in the 1960s in the name of modernization. In the 1950s-1970s, Art Deco architecture seemed hopelessly dated and old fashioned and wasn’t valued as historic yet, the same way a distinctly 1970s building would be seen today.

But the style of the time was only a part of the reason why the Sears building was covered up. During the 1960s, when civil unrest was reaching a boiling point and riots were occurring with increasing frequency, Sears added the paneling and bricked up windows to protect the structure from being destroyed in the event of a riot and minimize the chances that the store’s contents were damaged.

This year, when Sears finally closed its doors, construction crews went in to begin disassembling the layers. After the metal paneling started to come down, the building’s secret beauty was revealed. Vertical mosaic columns and original murals depicting Houston’s history were all hidden behind the plain, beige facade.

And now, Houston had a choice. Continue taking this down, or preserve a bit of beautiful history? 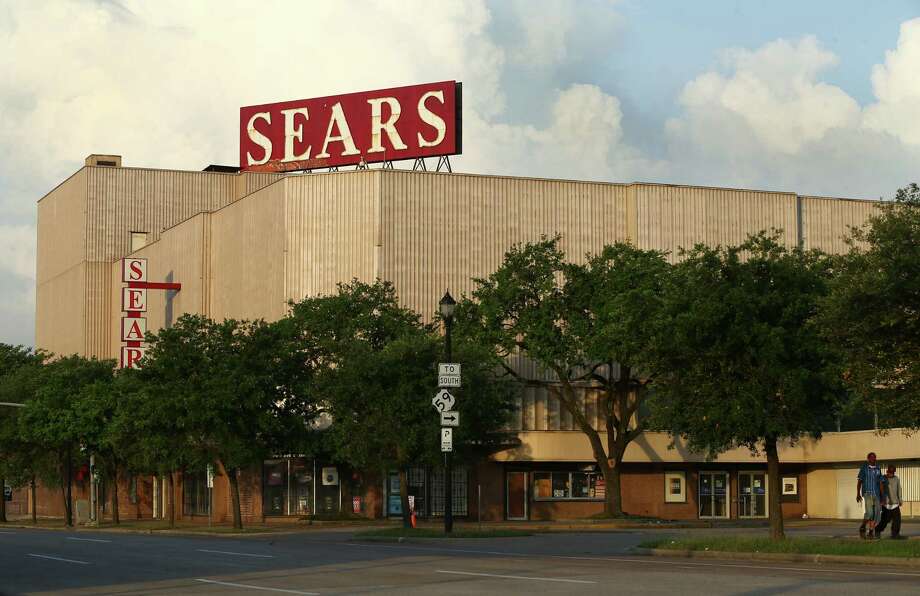 They chose the latter. Approved this year, this building will be completely renovated to celebrate the building’s history and embrace today’s pace, a perfect marriage for a city all about the hustle. The renovation project will turn the 190,000 square foot building into a “startup incubation center” and the counterpoint of a four mile “innovation corridor” connecting downtown and the medical center. As part of the transformation effort, windows and light wells will be added to the existing structure. The completed facility will feature classrooms, co-working spaces, offices, restaurants, cafes, and retail space.

We can’t wait to see what other surprises the Sears building has left to reveal as the paneling continues to come down. The Heights Blog will continue to follow this story and provide updates as more information about the project is released. Hopefully the owners of more historic buildings will take notice and follow suit, returning some of Houston’s past treasures to their former glory.